A frequent challenge when working with Dynamics CRM is making sure that configuration data like teams and queues have the same record GUIDs in all of a project's different environments for development, testing and production.

Without identical GUIDs, any processes, scripts or other customizations that reference a record's id will have to be changed between environments, and this is risky because it means you're running a solution in production that's different than what was actually tested in a lower environment.

In the past I've used a few different open source tools for keeping record GUIDs in sync, but I never liked any of them, so I decided to build my own. I call it the Alexander Development Dynamics CRM Configuration Data Mover.

The Dynamics CRM Configuration Data Mover is based on the idea of a single job with multiple steps. There are certain job-level parameters (source organization, target organization, etc.), and each step has a FetchXML query for the records and attributes to be retrieved from the source system and transferred to the target system. The tool also allows a job to be saved to an XML file so it can be reloaded later.

When you first open the tool, it looks like this. 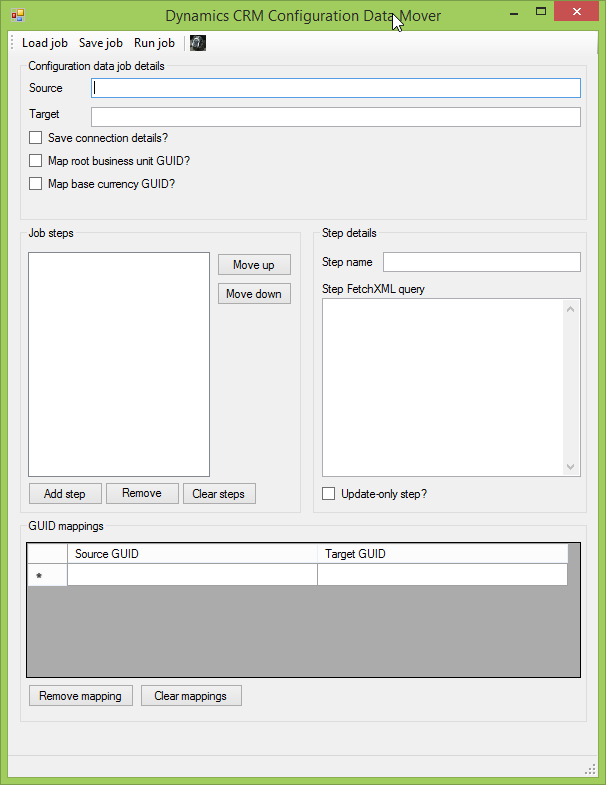 The way the tool works is that it first sets up any GUID mappings, and then it loops through each job step. It executes each step's specified FetchXML to retrieve the set of records to transfer. It loops through each record and tries to update an existing record with the corresponding GUID in the target system. If it cannot find an existing record to update, it creates a new one with correct GUID.

Here's a screenshot of the GUI with a job fully defined. 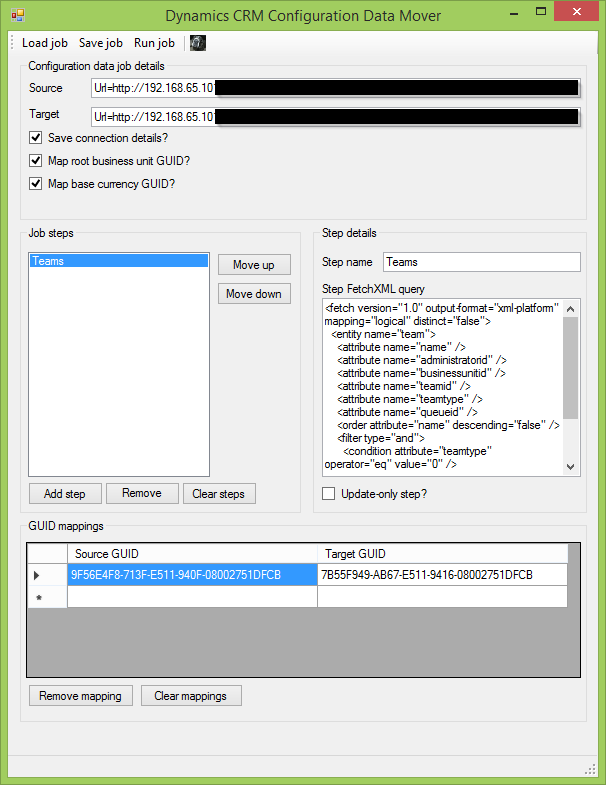 Here's an explanation of the various settings and parameters:

There a few things to keep in mind when using the Dynamics CRM Configuration Data Mover:

To elaborate on that last point, it's similar to how you have to structure an import for accounts and contacts into CRM. You have to import the account first without a primary contact, then create the contact and set its parent company to the account before finally updating the account to set its primary contact. You probably won't be using accounts and contacts as configuration data, but I've seen lots of situations in the past where there are cross-references like this between configuration data entities.

I've also built a separate command line tool that can execute a job from a file generated by the GUI tool so that configuration data transfers can be automated. This would be useful if you have a single "gold" organization that contains configuration data and you want to automatically push out updates to all of your other organizations.

One thing worth noting is that if you specify source and target connections as parameters at runtime, those values will override anything stored in the job's configuration file. 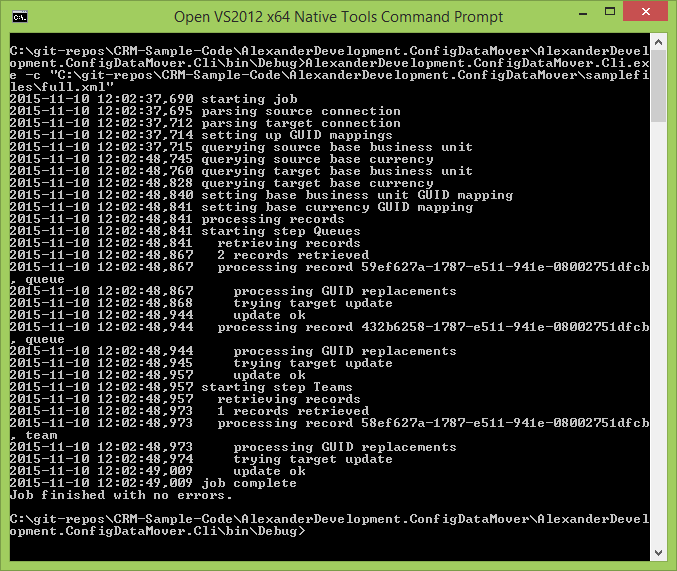 You can modify the format of the logs by updating the log4net configuration in the app.config files. An overview of logging configuration options can be found here.

The source code is available in my GitHub repository here.

A compiled version can be downloaded here.