In my current Dynamics CRM project, I am the solution architect for a new initiative that was set up as a "mini-project" separate from the existing CRM solution's production support and feature enhancement teams. We had our own PM, testing team, business analysts and developers. As we approach go-live of our solution, we are at a point where we are now integrating our work with the other work streams, and this has led me to wax philosophical on the optimal arrangement of environments (dev, QA, production, etc.) to support a successful Dynamics CRM project both pre and post-launch. In this post, I will present an overview of the environments needed along with diagrams showing how configuration and releases should flow through them.

Generally speaking, we think of a generic software application as moving from dev->QA->staging->production, and conceptually a Dynamics CRM solution is the same. (In this post I am using the term "solution" to mean the totality of an application as opposed to an actual CRM solution package.) For a small project team (< 10 people) or a small project (minimal customization, limited custom code), having only these four environments would probably work just fine for the entire solution life cycle. Once you exceed either of those thresholds, though, this model will no longer work.

For the purpose of this discussion, you can think of a Dynamics CRM solution as existing in one of two states, pre-launch or post-launch. Pre-launch you will have many developers doing many different things (forms, workflows, plug-ins, migration scripts, etc.). It's frenetic and messy, and you have to deliver a single integrated solution at the end of the process. Post-launch, on the other hand, your primary objective will be stability, and you'll need to make sure you can move bug fixes into production rapidly without also having to deploy incomplete or not-fully tested feature enhancements.

Here is the pre-launch environmental diagram: 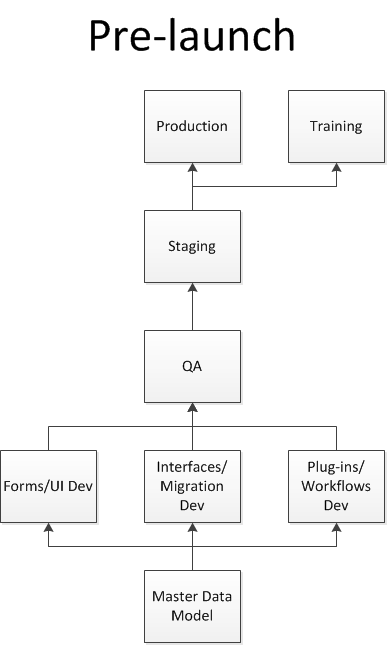 Here is the post-launch environmental diagram: 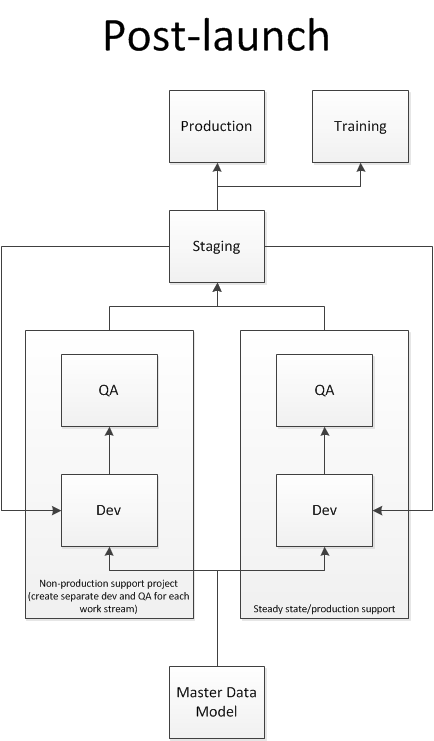 Each of these examples follows the basic dev->QA->staging->production paradigm except they start with a data model environment. Pre-launch has multiple dev environments with a single QA environment, while post-launch has a separate dev and QA environment for each work stream (production support, feature enhancements, other initiatives, etc.).

The master data model environment is the same in both pre and post-launch.

In pre-launch, you will likely have multiple teams, each specializing in a different aspect of your solution. If you have a group working just on the CRM front-end, that team should have a separate development environment than the data interfaces team. This keeps developers with different agendas from stepping on each others' toes, and it makes release management easier because each team will generate its own solution (unmanaged, of course). In post-launch, you will likely have fewer teams and/or smaller teams, so the need for multiple dev environments is diminished. I will note that some people feel each developer should have his or her own development environment, and the structure I have outlined can support that, if you treat each of the depicted dev environments as the single "master" dev to which the individual team members promote their changes and where all official unit testing takes place. Also, your specific pre-launch dev environments may be different from what I illustrated in the pre-launch diagram. The point is that you should have a separate dev environment for each separate development team.

As I mentioned earlier, the goal of pre-launch is a single, integrated solution, so that's why all the dev environments here feed into a single QA. At this point your testing team can make sure the different teams' code and configurations play nicely together, and it's better to catch any issues early. In post-launch, it's important not to commingle code too early lest you need to move an isolated piece into production quickly, so that's why each work stream has its own QA environment where testing can take place without impacting the other work streams. QA is also the lowest environment in which any customers or external stakeholders (interfacing applications) should see the solution for demos or reviews. There is of course some risk in showing code before it's been passed by the testing team in QA, but since it should already be unit tested in dev before being promoted to QA, the risk should be minimal.

You may or may not need a training environment, I think it's a good idea to have a place where users can learn in a relatively consequence free environment and you don't have to worry about them accidentally deleting or creating data that would impact UAT, integration testing or production support validation activities. Updates should flow into training when they are ready to move to production.

Production is where the solution goes when it's ready for users to use it. There will always be only one production environment for a given solution.